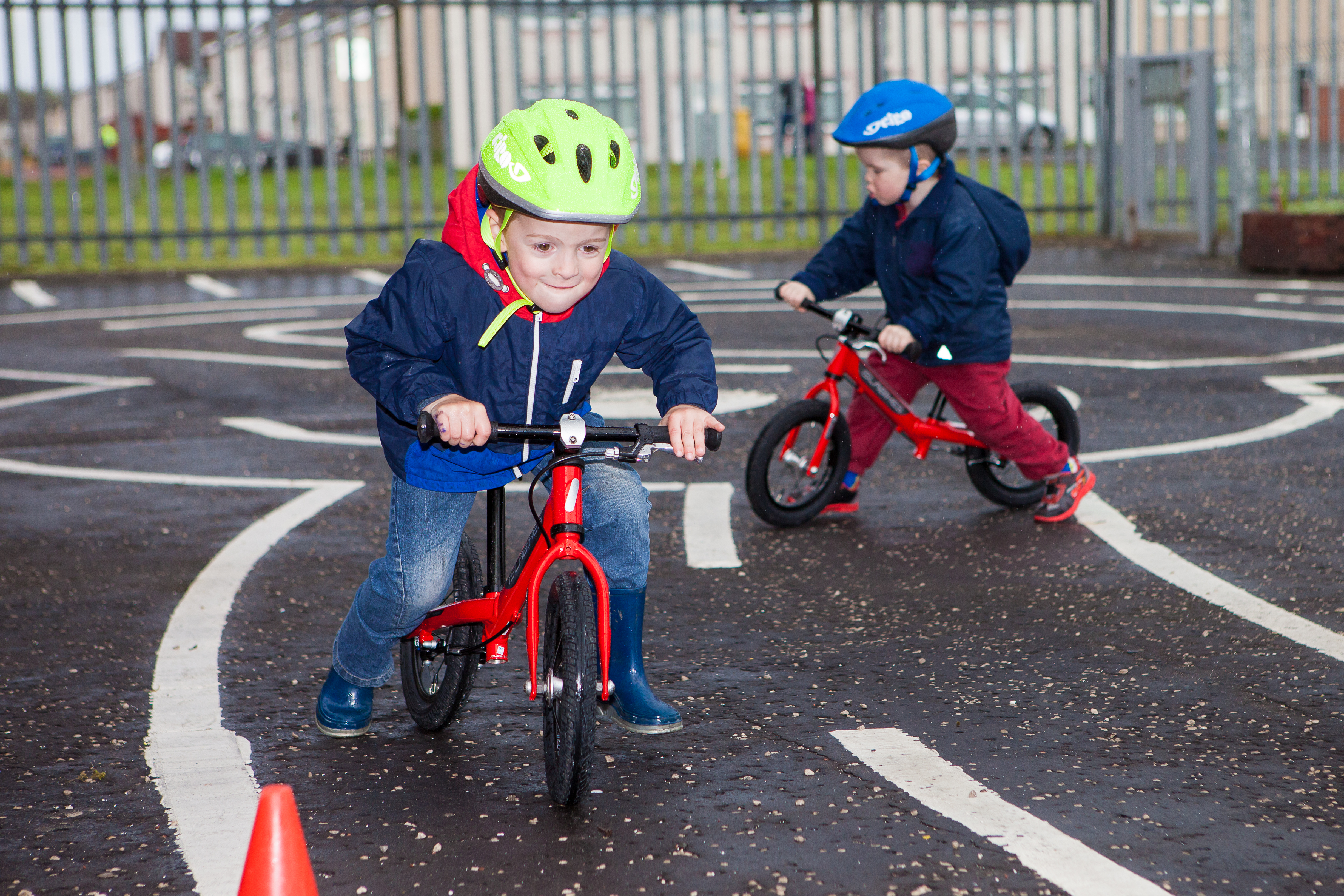 Last Friday Play on Pedals revisited North Lanarkshire, this time to see Jackie Fulton at Shotts nursery deliver a session of cycle training with children from her nursery class. Drew Michie, one of Cycling Scotland’s experienced cycle trainers joined the session to trial some of his own Bikeability games with the children.

It was a very interesting and informative afternoon. We watched Jackie spend time with the children before and after the session, talking about all the different things they know about cycling and what they could remember from their first session of training. Jackie asked them whether they cycled at home, what parts of the bikes they could remember and what they liked best about cycling. The children also drew some parts of the bikes including a helmet and a trailer.

We all then got ready to go outside and put on waterproofs and wellies. It was clear that the children were really keen to get on their bikes as soon as possible but Jackie made sure to talk through the different parts of the bike and the idea of a helmet and of the use of brakes; they played a game where they ran up the playground and had to run back to point at a specific part of the bike, getting them warmed up at the same time as reiterating their learning from the previous week.

The children quite clearly had differing experience with bikes, one little girl said that these were the ‘fall-y bikes’ because, unlike a tricycle, they fall over when you let go of them. She had spent lots of time playing on a tricycle and therefore found it more of a challenge to sit properly on the balance bike and to trust herself to balance it. She started out the session quite tentatively walking with the bike underneath her but after an hour and some games to encourage her to take her feet off the ground – pretending to leap like a frog both legs at once – she had greatly improved her confidence and her balance.

We watched one boy cautiously manoeuvre about the playground, sometimes with ease, sometimes wobbly and unsure of his legs. As soon as we set out a race which included running to the bike, mounting the bike and scooting back to stop in a box, he lost all fear and was speeding down the race line, keen to win the game.

Another was clearly an experienced balance bike cyclist, he whizzed around, dodging cones, people and bikes. He could lift his legs up and could stop in the box. However, when asked to straddle a pedal bike and place one foot on the pedals, keeping still, he was worried that he would fall over and wouldn’t be able to keep his balance – holding the bike and standing on one foot was quite a different challenge from scooting at speed around the playground.

Throughout the session, Jackie subtly linked their fun and games to the curriculum of excellence – asking them to stand ‘in line’ or ‘side by side’; calling them to go ‘first’ or ‘second’ or ‘third’; using an allan key to ‘lift up’ the saddle; and requesting they stop in the ‘square’. She noted to us how easy it is for a session like this to encompass a broad spectrum of the curriculum, such as technology, literacy and maths, as well as health and well-being.

We finally stopped after about two hours worth of balance bike play, however, the children could have continued for hours and were completely oblivious to the rain that poured. It was wonderful to see how engrossed they were in their bikes, how they each had very different styles of learning and interests in the bike – while one might want to zoom around, another might prefer testing out the different types of bikes and swapping them with another – and how quickly they gained skills and confidence.

Thank you so much to Jackie and the children at Shotts nursery for giving us the opportunity to see her session in action and to learn more about how we can best roll out this training across Glasgow. We can’t wait to get started!