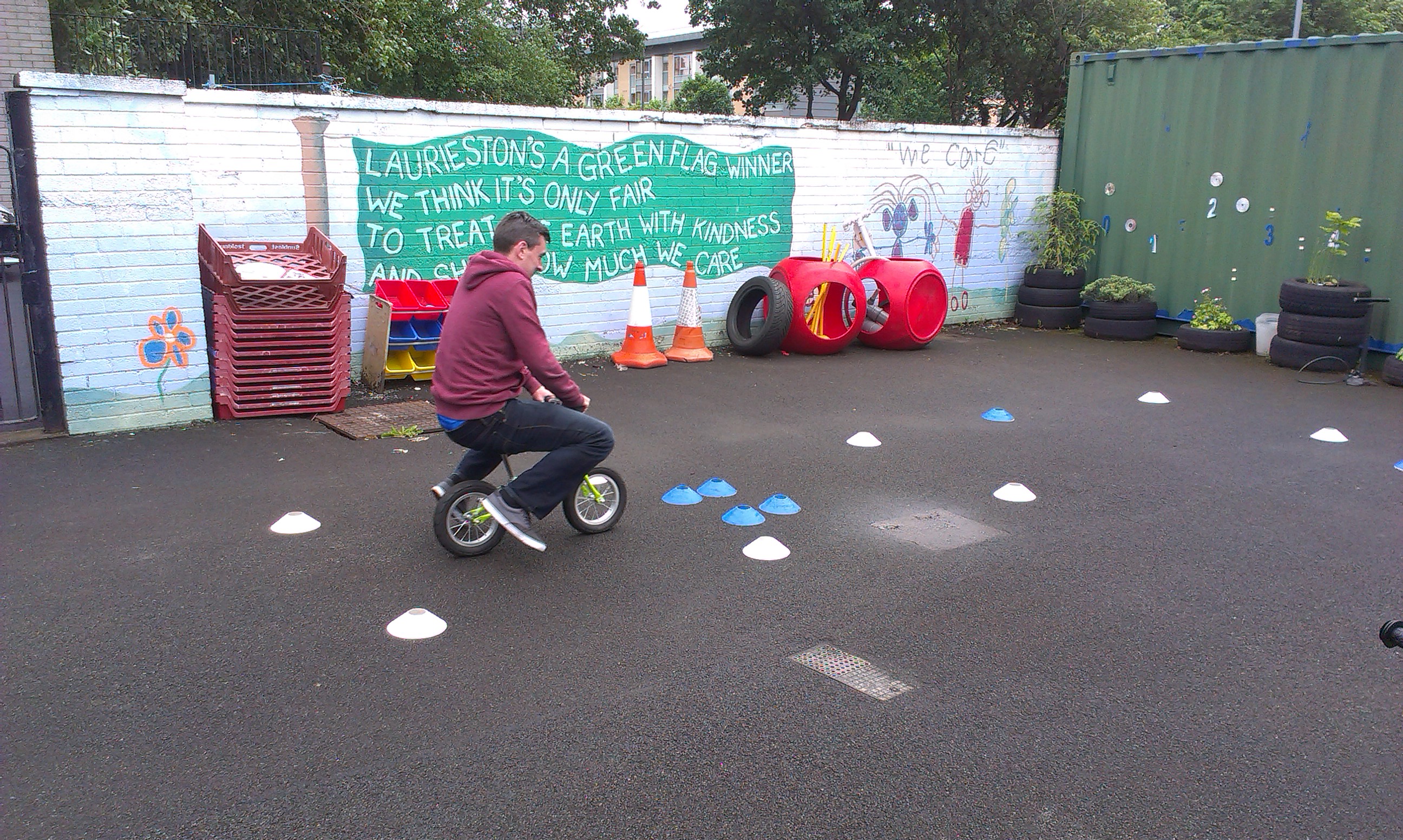 We’ve had some great fun at two festivals since the start of June – the Gibson Street Gala on the 1st and Streetland in Govanhill last Saturday 7th June.

At Gibson Street Gala, Play on Pedals were in Kelvingrove Park where we set up a taster session space for children to practice their skills with instructors and within minutes we had kids dragging parents across the park to come and have a go! Despite the rain, which persisted throughout the day, we had loads of fun with children (including our youngest child yet at only 18 months!). We pretended that sharks would bite off our toes if we put them down in between the blue cones and also tried out a new game called ‘Curling’ – gliding with the bike to try and reach closest to a point without braking or putting our feet down. Curling requires a good judgement of distance and speed and is really hard – Polly was repeatedly challenged and beaten by children with more accuracy and better speed control.

Our day with Streetland Festival in Govanhill was also great fun. To the beats of an African drumming workshop, we set up a small course in Westmoreland Gardens and spent two hours with a great mix of children, creating games and slalom courses. We pushed off like frogs with both feet at once instead of walking with our bikes and we weaved around hissing snakes. We even glided across the desert, past a huge pyramid and kept our feet up in the air and away from scorpions! Over the course of twenty minutes one little girl had moved from walking with her bike to gliding with feet in the air all the way around the course – she could dodge the cones and use her brakes and was instructing other children what they had to do at different parts of the course. A little boy turned up with a bike on stabilizers that were making him lean heavily to one side, not using his own balance and for the first five minutes of being on a balance bike was finding it really hard to stay upright but after making sure he kept his head looking straight ahead and up, he was soon manoeuvring the bike to the end of the course and turning it around without getting off it. We really enjoyed witnessing these improvements and seeing the enthusiasm from the children, it just goes to show how fast children learn and how keen they are to have a go at new experiences!

We will be at more events this summer, including the Glasgow Cycling Festival on the 21st June – come to FreeWheel North from 2-4pm on Glasgow Green and see us in action.