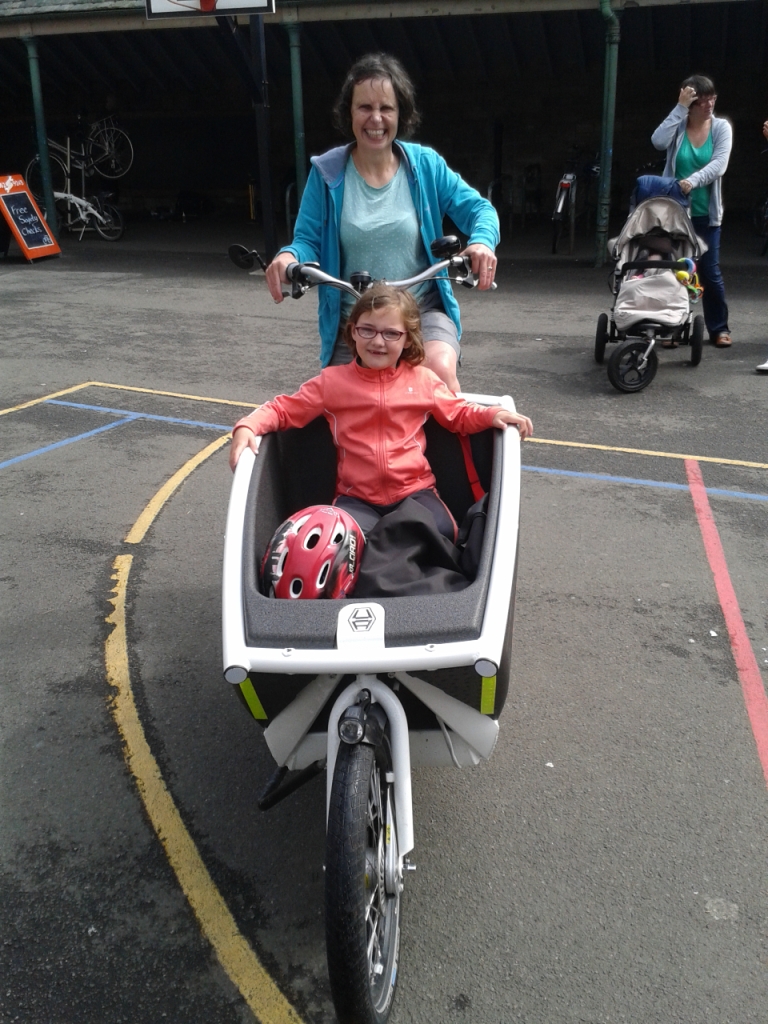 Last Saturday Play on Pedals travelled across to Edinburgh to join in some of the fun of the Edinburgh Cycle Festival.

We had been invited to help out at the Bike Curious Family Workshop being held at Sciennes Primary School and spent a morning surrounded by kids and parents trying out lots of different types of bikes for families.

Play on Pedals was running the balance bike activities for little kids along with Angela the head of Sciennes and we had a mix of experienced and new bikers turning up for a go around the cones. We successfully managed to remove some stabilizers from a little girl’s bike and once her saddle had been adjusted she was learning to glide and balance in no time! Angela had set up quite a challenging obstacle course using planks of wood for the children and it was interesting to watch the diverse ages test their own abilities and confidence with both balance bikes and pedals- particularly trying to balance over a low-level see-saw plank.  As they realised that their feet would be lifted off the ground and their weight would shift the see-saw balance most of them had a slight moment of panic before allowing their bodies to go with the motion and rolling off the other side of the see-saw to tackle the next block of wood.

These kinds of obstacles and challenges are useful learning tools for instructors also, to measure the level a group of children under instruction can tackle and when it becomes too challenging and therefore potentially a negative experience. Particularly within a young group, each child comes to the session with such different levels of ability, it is important that the instructor can devise challenges to suit each individual child without putting off or boring others.

While we whizzed around cones, we were being circled by parents riding tandems, cargo bikes and bikes with children strapped into wicker baskets. CTC and the Edinburgh Festival of Cycling had provided a sample of family friendly bikes for people to have a go on and the variety of  bikes seemed to fit the variety of families in attendance. I spoke with one family who’s child was really keen to get a bike for his 4th birthday. We talked about how they could buy him a pedal bike and take off the pedals so he could use it like a balance bike until he was ready to pedal; we spoke about the games and activities they could play with him to get his balance better and I answered their questions about how to fit a helmet safely. His mum was worried about cycling with him as she was not a confident cyclist and had not ridden in years; his dad on the other hand described to me how where they came from in India children (and adults, mostly men) often ride on the front handlebars of bikes around town. While she was asking me for advice about how she could learn to ride, he was asking me about the possibility and legality of putting his son on his handlebars and cycling around town. I sent her off to find out more information about the Edinburgh Belles – a group of women who meet and go on cycle socials – and information about the Edinburgh Bike Station, which runs adult cycle training and led rides (the Glasgow equivalent being Belles on Bikes and the Glasgow Bike Station). I recommended to him that rather than putting his young child on his handlebars, which would not go down well on the streets of Edinburgh, he instead try have a go on the bike tag-along with his son and the tandem with his wife and see if he could capture some of the spirit of handlebar-fronties that way…