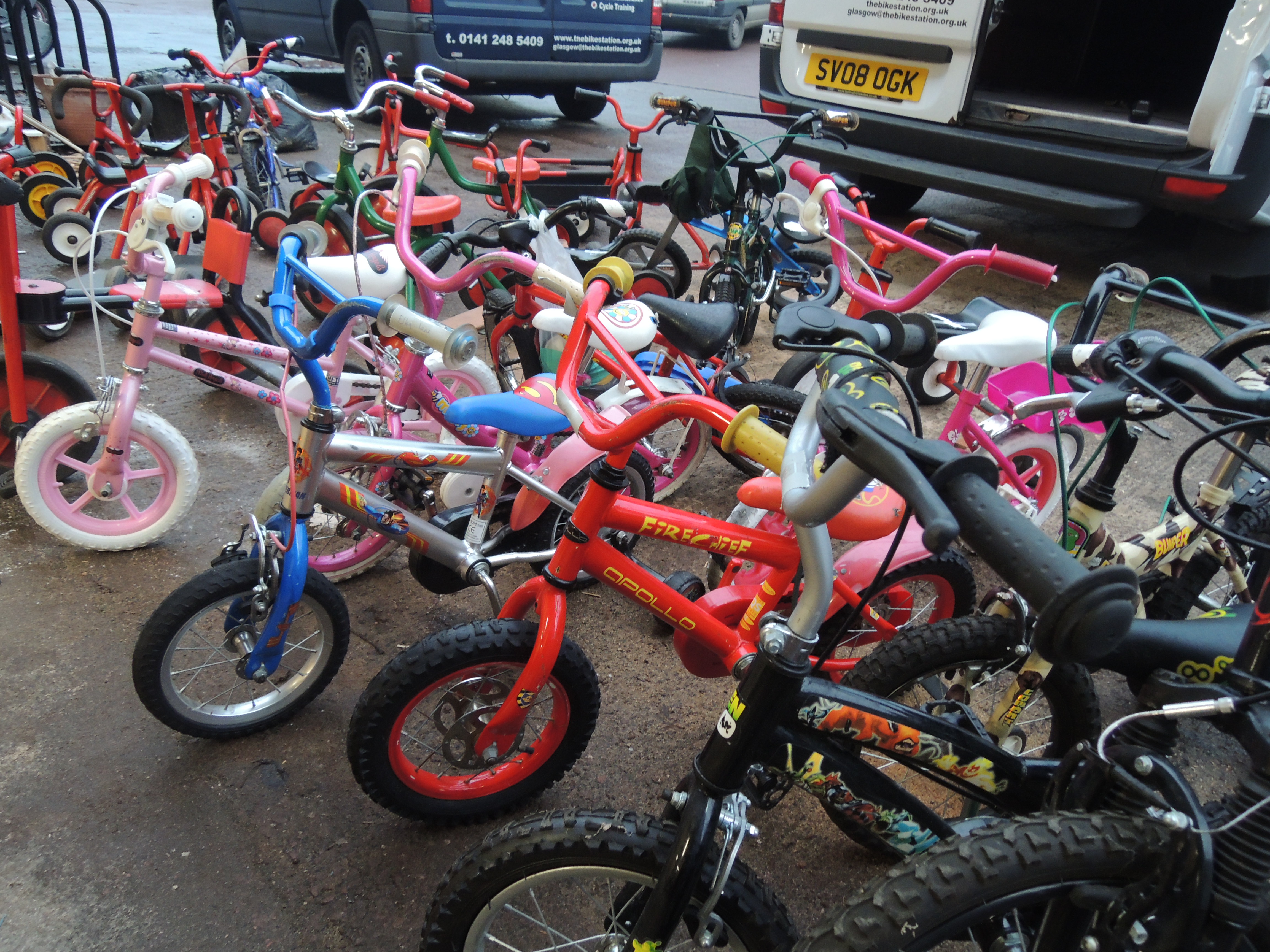 Play on Pedals and volunteers from the Bike Station spent yesterday visiting nurseries across the North East of Glasgow to collect children’s bikes, trikes and scooters in varying states of disrepair.

Delivered with support from players of the People’s Postcode Lottery as part of the wider Play on Pedals project, these bikes are now with the mechanics at the Bike Station and over the next week will be restored with punctures fixed, pedals refitted, brake cables replaced and bolts tightened. Father Christmas has kindly offered to take time from his busy schedule to visit children from participating nurseries in early December and return these newly restored bikes; in the New Year staff from these nurseries will be invited to an Instructor training day.

As a pilot nursery bike swap, this initiative was helpful in highlighting the variety of tricycles, scooters and limited pedal bikes that exist in NE Glasgow’s nurseries. It has also demonstrated the reality for many of the nurseries in the North East of the city; that most do not have access to any form of balance or pedal bikes and few to tricycles or scooters. In the development of the bike swap, local authority and private partnership nurseries across the NE were contacted and given the opportunity to participate; despite almost all being keen to include cycling training in their nurseries and eager to train their staff as instructors, many simply did not currently have bikes to put forward for refurbishment.

Play on Pedals therefore is contributing to a changing approach to early years cycling development in Glasgow by providing a much needed resource for nurseries – both through the loan scheme of the Play on Pedals balance and pedal bike fleet and the refurbishing of existing bikes.

In addition, the bike amnesty currently being organised through the Bike Station will bring in donated children’s bikes to increase the numbers of second hand bikes that nurseries can use. If you have any children’s bikes sitting rusting in a shed or outgrown by your children that you wish to donate to the Bike Station to use within Play on Pedals, please find out more information here.

In the New Year, Play on Pedals and the Bike Station will be carrying out community focused bike swaps, encouraging children’s bikes to be swapped at local community events across the city.

Some of the few nurseries we visited yesterday that had pedal bikes included: