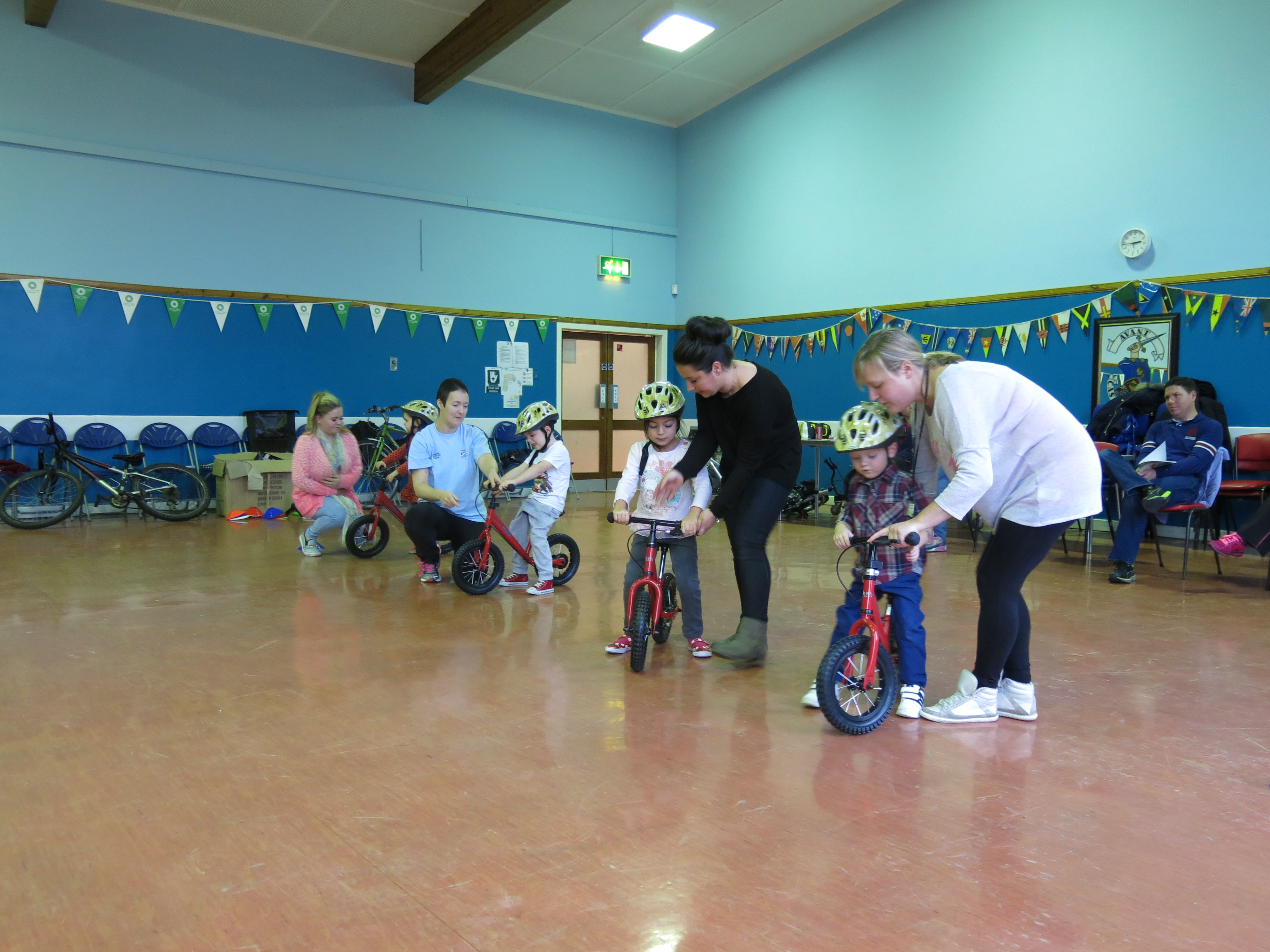 We had great fun at Castlemilk Community Centre on Tuesday, training nursery staff from nurseries including the Jeely Piece Club, Jeely Play Zone, Castlemilk Day Nursery, Indigo Nursery, St Fillian’s and Cassiltoun Stables Nursery, as well as a  volunteer from Drumchapel who joined to learn about how to develop Play on Pedals in her area.

Staff at the Castlemilk Community Centre gave us all day access to their hall for free and we were very fortunate to work with some fantastic children from Castlemilk Day Nursery in the afternoon.

We were also joined by a film crew from Media Trust who are making a feature about Play on Pedals for the Community Channel (to be aired early Jan), so participants had the added delight of being filmed riding bikes (some for the first time in 13 years) in front of the camera. Luckily, we had some keen and up for it attendees who made the whole day lots of fun.

We were all really impressed by the children in the afternoon who were completely unfazed by the cameraman or the presenter. A member of the nursery staff from Castlemilk Day Nursery, who was on the training, said she was particularly proud of the children, some of whom are often shy and less comfortable engaging with groups but who fully embraced the session and were perhaps the most talkative and active!

It is great to hear these kinds of comments coming from staff who know the children attending and can see a marked difference in their behaviour. We expect a lot from the children who participate in these training days; being instructed by new adults, with other people observing and supporting the games and in totally new surroundings – it would be understandable if children found this overwhelming. However, almost without exception, these training days have highlighted that children are so focused and engaged with the bikes and the games that they don’t even notice the adults around them and react positively to new people giving instructions.

One of the children at this training even went as far as to create new games for us to play, saying he wanted to go in and out of the cones and that they were volcanoes that might erupt if you touch them – great imaginative ideas being expressed!

We had time for some really useful feedback after each of the delivery sessions, talking with participants about what they felt went well (confidence working with children, delivery of one-on-one naming bike parts games, for example) and what could be improved upon (structured lay out of games and clear coloured ordering of cones for example, or more opportunity for children to play all together) – and it was clear to see this feedback working for the second group.

The Jeely Piece Club, as the Castlemilk Hero Organisation, will now work closely with the other nurseries to distribute out the bikes and Play on Pedals will return early next year to deliver maintenance training and a bike swap.

Some photos from the session: